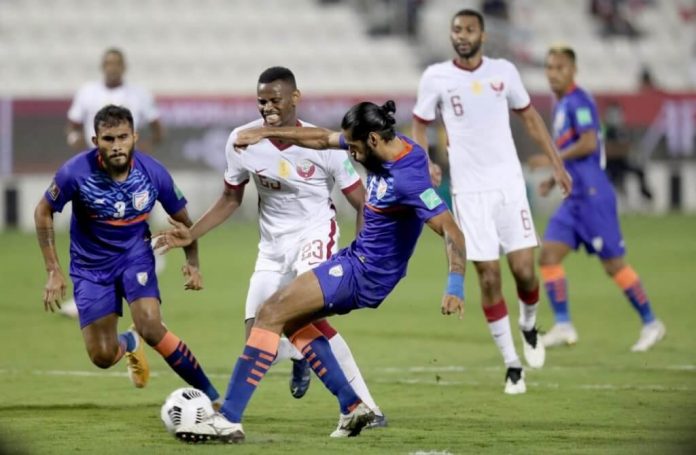 India put on a solid display against Qatar, losing marginally by a solitary goal after being reduced to ten men in the match’s early stages. On the back of an unbeaten run against European sides in friendlies, Qatar continued the streak as they beat India 1-0 in the FIFA World Cup 2022 / AFC Asian Cup 2023 qualifiers on Thursday. Despite the defeat, India can keep their heads high as they managed to put off most of the Qatari attacks with a sturdy defense. The match also saw the return of skipper Sunil Chhetri and Glan Martins getting his debut for the Blue Tigers.

We take a look at 5 takeaways from India vs Qatar.

The big man stepped up yet again with a shrewd performance with the gloves to keep the deficit to just one goal. Amidst a lot of doubt and uncertainty about his recent form, Gurpreet Singh Sandhu answered his critics with crucial saves in the match. He made nine saves, one punch and three clearances apart from maintaining a solid presence in the six-yard box. He seems to be a genuine big-game player as his antics were recognized even by the opposition. The towering presence in the box should’ve been a relief for the defence, especially when they had to play with ten men for most of the game.

Gurpreet’s saves were the highlights for the Indian team last night as he continues to shine in the goal. He initially grabbed the attention with his performances for India in March 2016 when India lost 0-4 against Iran in an away match of the 2018 FIFA World Cup qualifiers. The deficit could’ve been doubled if not for his crucial saves. He has managed to keep up such quality after five years, especially when playing against big teams. He was the bright spot for India last night in a bittersweet encounter.

2. A busy day for Glan Martins on international debut –

Glan Martins had a debut to remember as he went about his work the same way he does for FC Goa. In the absence of Rowllin Borges, holding the play and thwarting the opposition attacks was given to the defensive midfielder. An active player with an excellent defensive work rate helped India win more second balls and not let the Qataris create easy chances. Though the attacks were challenging to come from the back, the midfield duo of Glan and Suresh could contain the opposition attack to penetrate in the final third. This was evident in the gameplay of Qatar as they resorted to many long rangers.

It was a decent performance for the debutant, and it gives much-needed confidence for the defence to have a solid ball winner in front. This also gives the national team many options in holding midfield positions. The competition for places also increases, which will only improve the players and the team.