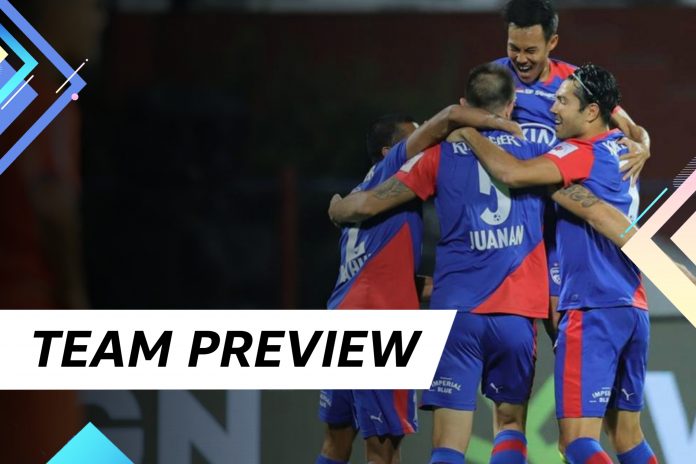 The seventh edition of the Indian Super League is set to kick off on 20th November. Bengaluru FC has been one of the consistent teams, won ISL in the 2018-19 season while were the runner-ups in their debut 2017-18 season. The team were crumbled by ATK FC in the semi-final stage last time around. In the league points table they stood in 3rd position with 30 points having won 8 games, drawn 6 and lost 4. They have also made their qualification to the 2021 AFC Cup play-off round. There is no question that the Blues have one of the strongest squads in ISL. Having kept most of the spine intact, there is no dearth of leaders as well on the field. Let’s have a preview of the team and how the club could line-up for the ISL 2020-21 season.

The Spanish head-coach Carles Caudrat has been known to players and the football environment in India. He specializes and apply more pressure on players to score on set-pieces. His way of tactics to attack more and also defend tightly to concede fewer goals has been impressive for the fans to observe. The club has recently announced a 32-man squad, with 17 players from last season’s squad making the list again –

The club has seen some departures as well as signed some promising players to fill the positions in the tactical aspect. Left-back Nishu Kumar didn’t show his interest to remain at the club and joined Kerala Blasters FC while Albert Serran was released by the club due to the age factor. To fill their boots, an extraordinary addition of Ajith Kumar was made as the club grabbed him by paying a transfer fee to the I-League club Chennai City FC. Fran Gonzalez has been another name who comes in with the baggage of experience playing in Spain. Last season he plied his trade with I-League side club Mohun Bagan and made 16 appearances. Surprisingly, he was usually deployed as defensive-midfielder but yet made his efforts to score 10 goals and provided one assist with 82% passing accuracy, and also made 93 interceptions. The 30-year-old center-back Pratik Chaudhari was also signed, who made over 44 appearances for various ISL clubs previously.

Bengaluru FC also signed two new foreign strikers Cleiton Silva and Kristian Opseth to strengthen their attacking position. The 33-year-old Cleiton Silva was the two-time top goal scorer in the Thai League. In a total of his career till now, he scored 118 goals and provided 28 assists in 204 appearances for different clubs. The Norwegian striker Opseth played for Adelaide United in A-League last season, where he made 21 appearances and scored 6 goals. The 30-year-old versatile striker has 68 goals and 21 assists registered to his name till now for 166 matches. Contract of players like Erik Paartalu and Dimas Delgado were extended while Sunil Chhetri, Juanan, Suresh Singh, Harmanjot Khabra, Leon Augustine, Ashique Kuruniyan, Udanta Singh, Deshorn Brown, Semboi Haokip were in contract already with the club.

In addition to this, the club has also managed to promote goalkeeper Dipesh Chauhan from the Under-18 squad while left-back Naoram Singh from the reserve squad and goalkeeper Lara Sharma, Joe Zoherliana from ATK reserves and Aizawl FC respectively. Midfielder Wungygayam Muirang, former Gokulam Kerala FC, and forward Thoi Singh from Reliance Youth Foundation was the last acquisition by the club.

The role of goalkeeper will be played by none other than Gurpreet Singh Sandhu. Gurpreet won two Golden Glove awards back to back in ISL 2018-19 and 2019-20 season as well.

Head-coach Carles Caudrat mostly prefers 4-3-3 formation giving more freedom to full-backs. Rahul Bheke and Ajith Kumar will have the responsibility to make runs and put crosses across the wings. The center-backs duo Fran and Juanan will be guarding the backline while the team pushes forward to attack. It will be tough for the opposition to crack this four-man defence as everyone have good valuable experience of playing football at a competitive level.

In midfield, Dimas Delgado will be partnering with Erik Paartalu. The 37-year-old Dimas is the oldest player in the league in terms of age who have made 54 appearances for the club. He’s comfortable in ball possession keeping and also helping strikers to make run into the box by offering a overhead long pass from the midfield. Commonly he is used as a set-piece taker as Bengaluru FC specializes to score more goals on set-pieces. Erik has always been in the role of the pivot, where he defends ahead of the back 4 and if needed, attack from midfield by taking shots directly towards goal. Suresh’s astonishing capability to press more into the opponent’s defence has been eye-catching. The dynamic combination of Dimas, Erik, and Suresh looks very promising where it makes assured that the ball keeps rolling without losing the possession to create more chances for scoring goals.

The final three in attacking looks very promising as two Indian internationals on wings and the top scorer of the Thai League will take up the striking position. Silva will be backed by Chhetri on the left-wing while Kuruniyan will be on the right-wing. It will a great combination to watch out for as both Indian internationals have a good grasp in pace and crossing into the box. Its no need to mention Chhetri has been a leather player having solid experience in the field for domestic and international level. 32 goals and 5 assists are registered in name of Chhetri while playing for Bengaluru FC. Also, Kuruniyan has partnered with Chhetri so it will not be a difficulty for the front three to create countless chances and convert them into goals.

Bench Strength: With ISL implementing the 5 substitution rule, every player will be willing to level up and make their way into the starting 11. The Indian Centre-Back Pratik Chaudhari will take the responsibility of defence in absence of any foreign defender. Harmanjot Khabra can ally in midfield. Bengaluru FC has numerous options for attacking positions as Udanta Singh holds good experience at wings. There are other good options for striking positions like Kristian Opseth or Deshorn Brown in place of Cleiton Silva.