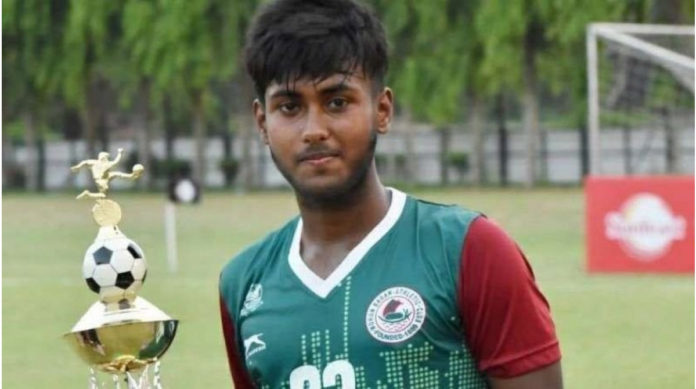 While most teenagers are struggling to find their passion and footing in this cut-throat competitive world, a 19-year-old coming from suburban Bengal, playing for one of the giants in Indian football guided them to successful I-league campaign amid preparing for his Boards. Sheikh Sahil did it all in the 2019-2020 season, winning the I-League with Mohun Bagan as well as making sure his education was complete. Hence he is our Indian Player of the Season.

Sahil graduated from the Mohun Bagan academy to the senior team along with 6 other bright young talents that included the likes of Subho Ghosh and Kiyan Nasiri after they had impressed Kibu Vicuna, who then was in charge of the senior team, in a local football tournament organized by one of the leading media houses in the country. Sahil’s first burst of brilliance came in the Calcutta Football League in the derby game. Playing as a defensive midfielder alongside Fran Gonzalez, Sahil was instrumental in keeping the likes of De La Espada, Didika Ralte, Jaime Santos Colado, Ronaldo Oliviera quiet as the sides played out a goalless draw.

Sk. Sahil started as a Centre Back and played in the heart of the defense for the U-19 outfit. It was Kibu Vicuna who promoted him up the pitch to play as Defensive Midfielder and Sahil made that position his. Sahil made his I-League debut in Aizwal, in the first game as a substitute. He had to wait till the 4th game of the side’s I- League campaign against Gokulam Kerala to get his first start and he hasn’t looked back since. Moving from strength to strength, he became an integral of the Mohun Bagan midfield which oozed brilliance and played a brand of football seldom seen before in Indian football. The pressing and possession-based football that Mohun Bagan played was so soothing to the eye, eventually resulted in the team being crowned champions with 4 games left in the season.

As a defensive midfielder’s job description goes, you have to do most of the dirty work for the side. We have seen the greats like Vieira, Gilberto Silva, Gattuso, Makelele, and Sergio Busquets all do it for their teams. But what made these players great was the flair they had and displayed while they had the football. Sahil displayed the exact bit of brilliance with a passing accuracy of almost 87%. While he would be all over the opponent when Mohun Bagan didn’t have the ball, he would equally and gracefully move the ball along when he had it. His partnership with Fran Gonzalez in the heart of the midfield gave the likes of Joseba Beiteia, Nongdogba Naorem, V.P. Suhair to exuberate their finesse. The full-backs had the independence of running up and down the flanks because the confidence they had in this teenager to break play up in case of a counter.

While the kid exudes confidence and maturity generally not seen at his age, but still he has a long way to go before he fulfills the promise he has shown this season. At only 19, he has shown the physicality that is needed to sustain him as a holding midfielder and he will only grow stronger as he ages that physicality aspect of his game will go up a few notches. Even though he has shown he has an eye for a pass, it’s not at its full potential as he not been directly involved in any of the goals scored by Mohun Bagan this season. In 16 games for the senior side, he is yet to get an assist or a goal to his name yet and if he manages to incorporate these aspects in his game, he could be knocking on Igor Stimac’s door for an opportunity in the national side. There can be no doubt about his work rate and he will have to maintain the same intensity as his career in football grows.

Sk. Sahil is a player in the making but one cannot ignore the impact he has had already. He was a vital cog for Mohun Bagan this season and a side which had struggled in previous seasons because of a leaky defense and lack of protection ahead of it, Sahil’s inclusion was the missing piece in the puzzle. Given Sahil plays as a defensive midfielder his discipline has been unparalleled, with only two yellow cards picked throughout the entire I-League campaign. There cannot be any doubt about the amount of talent this young posses, to be a vital member of the title-winning side at the mere age of 19 is no mere feat, and he can only go places from here if his feet stay grounded and his head in the right place.

Bengal has produced some of the finest defensive midfielders this country has seen. From the likes of Sudip Chatterjee, Mehtab Hossain to Pronay Halder, and now Sk. Sahil in the making. Mehtab who was a regular feature on the Indian National side under Bob Houghton, while Pronay has filled the shoes vacated by him in the current squad. Sahil has the potential to be great and he has got the fans of Indian Football very excited with his abilities. His contribution this season has been impeccable and every Mohun Bagan fan will be excited to see what he brings to the table next season, provided the management can hold on to the young man who has attracted a whole lot of attention and could move to greener pastures.