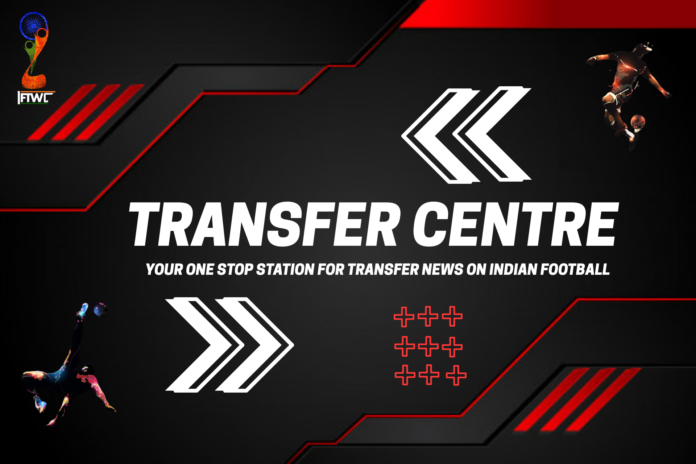 The Transfer Centre (Live Blog) will have All the latest transfer news and rumours in and around Indian Football.

FC Goa have officially announced the signing of defender Ivan Gonzalez. FC Goa’s centre-back last season, Carlos Peña, had retired from professional football and FC Goa were in need of a new name to join them. He joins them on a two-year deal.

Floyd Pinto, former under-19 coach of the Indian National Team, has been roped in as the assistant coach by Punjab FC. Pinto was relieved of his duties months back by the AIFF and the ex-Indian Arrows coach will have a new start at the Rounglass owned club.

09:00 – NEROCA FC’s Imran Khan is set to join Northeast United according to Goal.

22:19 – As per Goal, Mumbai City FC are in advanced with Bartholomew Ogbeche. Ogbeche was top scorer of Kerala Blasters and Northeast United previously.

17:25 – According to Khelnow, Gokulam Kerala set to sign defender Muhammad Asif. He played in the AFC Cup with Nepali club Manang Marshyangdi.

19:17 – As per Khelnow, Brazilian centre back Gerson Guimaraes is on the radar of Northeast United and Odisha FC.

16:32 – TRAU FC have announced the signing of Bidyasagar Singh. Bidyasagar was playing for East Bengal last season and had a good season in the CFL.

09:56 – According to Goal, Kerala Blasters have agreed terms Columbian defender Oswaldo Henriquez. He has played for clubs like Vasco and comes with lot of experience.

12:48 – As per Goal, VP Suhair is set to join Northeast United. He was linked with Kerala Blasters previously.

10:00 – Kerala Blasters are trying to sign Salam Ranjan Singh as replacement of Sandesh Jhingan. Anas Edathodika is another defender who is in the radar of Kerala Blasters.

15:00 – NEROCA FC have signed Wangkheimayum Olen Singh. Wangkheimayum is a defender who has played for East Bengal U18 and YPHU in the past.

14:13 – TRAU FC have announced the signing of Cleaven Hmar. Cleaven is varsatile midfielder who has experience of playing for Muvanlai Athletics and Fateh Hyderabad.

19:00 – NEROCA FC have announced the signing of Lamjingba Mutum on a 2 year deal. He is a defender who has played for Royal Wahingdah and NISA previously.

17:00 – Naorem James Singh returns back to NEROCA FC on a 2 year deal. The 27 years old defender has played for Bharat FC and DSK in the past.

13:00 – Nongthombam Ronaldo Singh has signed a 2 year contract with TRAU FC. Nongthombam plays as a defender and was with NEROCA FC previously. Read more –

09:00 – NEROCA FC have signed brother of midfielder Imran Khan, Akbar Khan. Akabar plays as a midfielder and has appeared for Ozone FC previously. He has signed a 2 year deal with the club.

07:30 – Boris Singh and ATK set to part ways. The U17 World Cup star from Manipur is likely to leave ISL Champions in search of playing time.

16:25 – NEROCA FC have announced the signings of Songpu Singsit on a 2 year contract. Songpu plays as a left winger and has played for FC Khanglai and Muvanlai Athletic.

16:42 – According to TMIndia, Both Pawan Kumars of Northeast United are set to leave the club. Experienced goalkeeper Pawan Kumar is set to joined Jamshedpur and on the other hand, young Pawan Kumar who plays as centre back is roped in by Real Kashmir.

14:00 – Naresh Singh has joined TRAU FC from Jamshedpur FC. Naresh is a young right back from Manipur.

16:00 – TRAU FC have announced the signing of Seiminmang Manchong. Mangku was playing for Odisha FC last season and has played for Royal Wahingdoh previously.

15:00 – TRAU FC have announced the signing of Prikanta Singh. Prikanta is a midfielder and has played for Royal Wahingdoh, DM RAO and SSU before.

17:01 – FC Goa handout new contracts to Nestor Dias and Kapil Hoble which end in 2022. Lesly Rebello has also signed a new contract which keeps him at FC Goa till 2023.

10.30 – As per Khelnow, Owen Coyle is in talks with Jamshedpur FC to become their new head coach. On the other hand, Northeast United are negotiating with John Gregory and Jorge Costa. John Gregory is front runner because his salary demands are less than Jorge Costa.

22:32 – Northeast United in talks with Mashoor Shereef. He played for Chennai City FC as a midfielder last season.

00:35 – According to Marcus Mergulhao, Romeo Fernandes will join FC Goa in the preseason. FC Goa might sign him if he manages to impress Juan Ferrando.

17:55 – Odisha FC have appointed Gerry Peyton as their assistant coach for the upcoming season. Gerry was previously associated with English Premier League side Arsenal.

09:30 – ATK-Mohun Bagan have extended the contract of Roy Krishna for one more year. Mumbai City FC were interested in signing the Fijian but ATK-Mohun Bagan managed to keep their star striker. Read more –

12:00 – TRAU FC have announced the signing of Abdul Salam. Abdul plays as a right back and has played for NEROCA and SSU previously.

18:31 – TRAU FC have signed Kisan who was captain of Sagolband United last season. Kisan has previously played for NEROCA. He has signed a two year deal.

18:12 – Odisha FC have signed Aizawl FC duo of Isak Vanlalruatfela and Paul Ramfangzauva. They have signed 4 year and 3 year deals respectively. Paul is a defensive midfielder and on the other hand, Isak plays on the wings.

17:18 – As per Khelnow, Hyderabad FC are set to sign Australian winger Joel Chianese. Joel plays for Perth Glory and scored 4 goals and assisted 3 in A League last season.

13:56 – TRAU FC have signed Tajuddin on a 2 year contract. Tajuddin plays as a forward and has previously represented Royal Wahingdoh and SSU.

16:00 – FC Goa have announced the signing of Sanson Pereira. Sanson was playing in the Goa Pro League.

11:00 – Cleiton Silva has joined Bengaluru FC on a one year deal with an option to extend further. He is the all time top scorer in Thai league. Read more –

21:50 – Churchill Brothers have announced the contract extension of Jovel Martins. He has signed a 2 year extension.

12:57 – Odisha FC have annouced the departure of Dorronsoro. He has signed for CF Badalona.

Thangboi Singto likely to join East Bengal as assistant coach. Singto was with Odisha FC last season and was also part of Kerala Blasters in the past. Read more –

Odisha FC have announced the signing of Thoiba Singh Moirangthem. Thoiba has previously played for Punjab FC. He is youngest player to score in AFC Cup. He has signed a 3 year deal with Odisha FC. Read more –

Reserve team captain of FC Goa is promoted to the main team of Goa. He has signed a 3 year deal with FC Goa.

Forward N. Olen Singh who was highest scorer of Saheed Manoranjan Trophy has signed for the team from Manipur. Manipur Santosh trophy goalkeeper H. Prasanjit Singh is another player who has joined TRAU.

As per Goal, FC Punjab have appointed Curtis Fleming as their head coach. The Englishman has previously coached Middlesbrough.

FC Goa have announced the departure of Mandar Rao Desai

Mandar Rao Desai has left FC Goa after 6 years at the club. Mandar played more than 100 matches for the club and also won Super Cup as well as ISL shield. He is joining Mumbai City FC next season.

Odisha FC have announced the signing of Baoringdao Bodo and Premjit. Both the players play on the wings. Premjit signed a 4 year deal with the club. Read more –

Bart Ogbeche is set to sign a contract extension with Kerala Blasters. He is their top goalscorer. Read here –

According to Marcus Mergulhao, ATK, FC Goa, Bengaluru FC and Odisha FC are interested in signing Sandesh Jhingan. They have inquired about his requirement.

09:39 – Miranda to be named as FC Goa asssistant coach

As per Goal, Clifford Miranda will be named as FC Goa assistant coach. Clifford was interim head coach FC Goa after the club parted ways with Sergio Lobera.

Odisha FC have announced the signing of Kamaljit Singh on a 2 year deal. Kamaljit has previously played for FC Pune City and Hyderabad FC.

FC Goa have announced the contract extension of Edu Bedia. The Spanish midfielder signed a new 2 year deal. Along with Edu Bedia, Hugo Boumous is another foreigner who has contract with FC Goa for next season.

Laldinliana Renthlei has moved to Jamshedpur FC as per goal. Laldinliana played as right back for Chennaiyin FC last season.

As reported earlier by IFTWC, Northeast United have signed Rochharzela from Aizawl FC. He was the top Indian goalscorer in the I League. They have also signed Nabin Rabha. Nabin is a versatile defender as he can play as fullback as well as centre back.

21:53 – Jamshedpur FC and Northeast United in talks with Pritam Singh

IFTWC Exclusive – Northeast United and Jamshedpur FC are in talks with Pritam Singh of NEROCA. Pritam is a right winger and scored 4 goals including a hat trick against TRAU in the most recent I League. Read more –

Hyderabad FC have announced the signing of Subrata Paul. Subrata was playing for Jamshedpur FC since last season. The Indian Spiderman has made 67 appearances for the National team. Read here –

According to Marcus Mergulhao, Mauel Lanzarote wants to return to India but is not linked with FC Goa. On the other hand, Chennaiyin FC wants to extend contracts of Nerijus Valskis, Rafael Crivellaro and Eli Sabia. 6 Chennaiyin FC players on contract expiry including Jeje, Kamaljit and Germanpreet Singh.

As per Goal, Odisha FC are set to sign Indian Arrows defensive duo of Hendry Antonay and Saurabh Meher ahead of next season.

Bengaluru FC annouced the signing of Pratik Choudhari and Lalthuammawia Ralte from Mumbai City FC and East Bengal respectively. Both have signed 2 year contract with the Blues. Read more –

Odisha FC have announced the signing of George D’Souza. George is a left back and was playing in the Goa Pro League last season. Read more –

09:18 – Abdul Hakku extends his stay at Kerala Blasters and Matej Poplatnik returns to Kerala Blaster after completing his loan spell

According to Goal, Abdul Hakku has extended his contract with Kerala Blasters. On the other hand, Matej Poplatnik is set to complete his initial 3 year deal. He spent last season on loan at Kaposvari Rakoczi.

According to Sportskeeda, Indian National Team midfielder Anirudh Thapa is set to sign a contract extension with Chennaiyin FC. His contract ran out on 31st May.

According to A League reporter Jack Fitzgerald, Brad Inman is in talks with an ISL club over a potential move. Other sources suggest that ISL Champions ATK is the club who are in talks to bring the A League star to India.

Kamaljit Singh is released by Hyderabad FC is all set to sign for Odisha FC. Kamaljit didn’t have best of the seasons with Hyderabad FC last time around. Read more –

Hyderabad FC have released 10 players from their roster. The list includes players like Robin Singh, Kamaljit Singh and Rohit Kumar. After roping in Albert Roca, Hyderabad FC are set to make many new signings. Read more –

IFTWC Exclusive – NEROCA FC midfielder Chanso Horam is set to sign for Mumbai City FC. The Islanders and Chanso have agreed on terms and the contract is said to be long term. Read more –

According to Khelnow, Kerala Blasters are in talks with spanish defender Victor Mongil. The former ATM b center back was signed mid season by ATK. He is currently a free agent. Read more here – https://khelnow.com/football/isl-2020-21-kerala-blasters-victor-mongil-talks