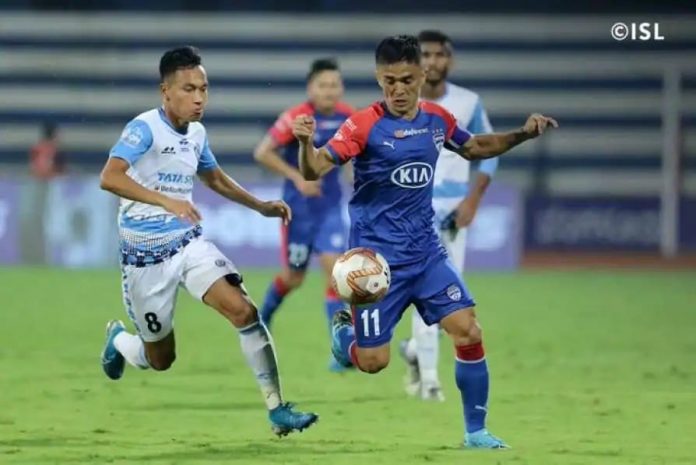 Today Fatorda is gonna witness the last duel of the year between the two strong sides Bengaluru FC and Jamshedpur FC. Both the sides will be eyeing for nothing less than 3 points tonight.

Looking onto the away side first, Jamshedpur FC will be fighting for a win to seal a position in the top 4 before the end of this year. Currently, the Men of Steel occupied 10 points in their account from 8 matches. So today’s match will be vital for them to make a leap from the current 6th position. Head coach Owen Coyle has yet another headache solve as inconsistency is the major key factor affecting his team currently.

Analysing the performance of the Home side, Bengaluru FC holds the third position in the point table with 12 points from 7 matches. Carles Cuadrat lost his main player Ashique Kuruniyan who was in top form and currently defence is the only matter of concern in front of him. The blues will be looking forward to grabbing all the 3 points to cement their position in the top 3 of the point table.

Top 3 Indian Players to Lookout for

Top 3 Indian players to watch out in today’s game are Sunil Chhetri, Aniket Jadhav and Suresh Wangjam. Sunil Chhetri will be looking forward to extending his run. Although he’s finding a bit difficulty in finding the back of the net this season he’ll surely be a crucial presence for the Blue’s tonight. The young prospect Suresh Wangjam has turned out to be an instrumental part in Cuadrat’s tactics. Surely his service at the midfield in creating an impact to the game will be valued today.

On the other side, starting-off as a ball boy to become one of the top players at Jamshedpur FC, Aniket Jadhav has recently pulled out some top-notch performance for the team. He was able to gain trust from Owen Coyle and is surely a player to watchout for tonight.

Top 3 Foreign Players to Lookout for

Top 3 listed foreign players to watch out from both the teams are Cleiton Silva, Dimas Delgado and Nerijus Valskis.
Cleiton Silva will assign the role of the target man tonight. Although a new face for the Blues, Cleiton has started picking up the pace and tactics. With a proper supply of balls from the midfield, he’s dangerous in the opposition half. Dimas Delgado is yet another foreigner to watch out for. He’s an important factor in the Bengaluru FC team and functions as an engine in the midfield.

On the other side, Men of Steel would be eyeing for the goals from the former Golden boot winner Nerijus Valskis. The goal poacher is surely gonna be a headache for the Bengaluru FC defenders. Surely the fans can expect some great moments from his tonight.

The Bengaluru FC wingback Ashique Kuruniyan suffered an injury with multiple fractures on his face in the match against Odisha FC. He’ll be out for an extended period. Other than that there is no suspensions or injuries from both the sides.

Both the teams faced each other 6 times from the past 3 seasons and accounts for 2 wins, 2 loss and 2 draws for both the clubs.

Bengaluru FC has a slight advantage over Jamshedpur FC in terms of the goals scored. The Blues scored 8 goals against The Men of Steel meanwhile Jamshedpur FC scored 7 goals.

As both the teams look evenly matched in terms of performance and have the ability to turn the events aroundy, we predict a 1-1 draw tonight.