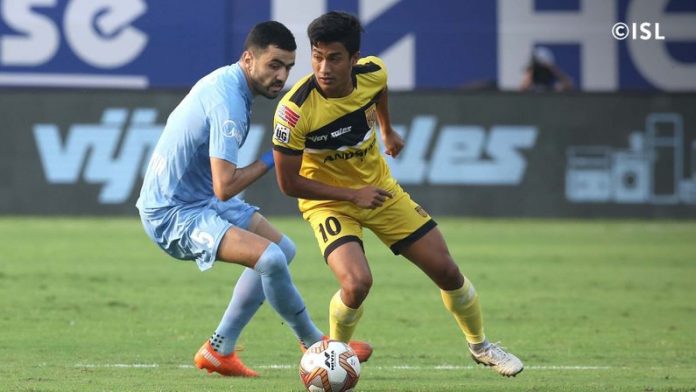 The Islanders and the Nizams are going to have an interesting clash at the GMC Stadium in Bambolim.

Mumbai City is at the top of the table with 25 points and ATK Mohun Bagan who are in the second position are having 25 points. This difference in the points is enough to speak about Mumbai’s play this season. The Sergio Lobera’s side will be looking for their 9th win of this season.

Hyderabad FC are in the fourth place of the table with 15 points, they have a difference of ten points with Mumbai City FC. Hyderabad has performed well in their last two games by scoring four goals in each game against Chennaiyin FC and NorthEast United FC. They will be looking forward to winning this game and take away three points.

3 INDIANS TO LOOK OUT FOR

Bipin Singh, Rowllin Borges, and Mohammad Yasir are the Indian players to look out for.

Bipin Singh needs no introduction as he is one of the most consistent players for Mumbai City this season. By playing for almost 700 minutes he has scored a goal and given three assists. He is a key player for Mumbai City in the left-wing.

Rowllin Borges along with Ahmed Jahouh have created many chances for Mumbai and they are one of the reasons why Mumbai is on top by scoring many goals out of the created chances.

Mohammad Yasir, the 22-year-old is the most important Indian midfielder for Hyderabad FC. He creates more chances for Hyderabad than any other Indian player. His skills and intelligence have helped Hyderabad in their last two games. He and Joel Chianese will be the key players for today’s game.

3 FOREIGN PLAYERS TO LOOK OUT FOR

Mourtada Fall, Hugo Boumous and Joel Chianese are the three foreign players to look out for.

Mourtada Fall is the reason why Mumbai City has six clean sheets in their ten games. The 33-year-old Senegalese has been a tough defender for all the opponents and he stopped the likes of Aridane Santana scoring against Mumbai last time when they both faced.

Hugo Boumous played only eight games but he has five assists and one goal on his name. Even though he missed the last game against Hyderabad, this time he is going to have a huge impact in the midfield.

Joel Chianese is a player who didn’t play last time against the Islanders and he will surely cause problems for them. He will destabilize their defence as Mumbai City has always struggled with the pace and Chianese has got both the power and the pace.

Mumbai City FC has no injuries, whereas Hyderabad FC has Subrata Paul, Nikhil Poojary and Fran Sandaza are injured. Whereas Souvik Chakraborthy went back to Kolkata due to personal issues.

Hyderabad and Mumbai have faced each other three times where Mumbai City FC won two times and the other game was, fortunately, a draw for Hyderabad FC.

Mumbai City FC are on a winning streak, and they would like to continue it, and Hyderabad FC has performed tremendously in their last two games and they also have their seventh foreign player out of quarantine, so we can see a different performance from them and they would be fighting for three points. With the squad strength favouring Mumbai, we predict a win for Mumbai City FC.