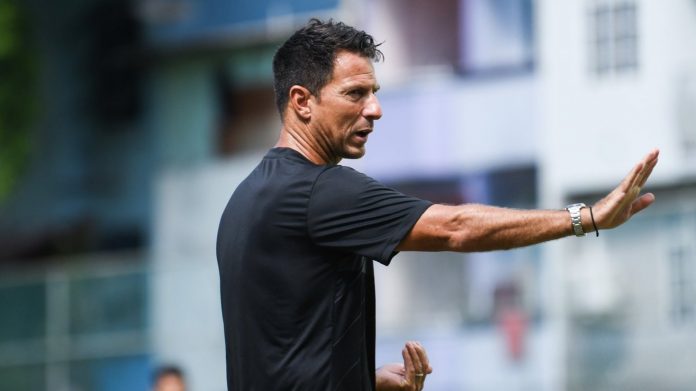 It was a frustrating Saturday afternoon for Marco Pezzaiuoli’s Bengaluru FC as the team failed to register another win at the group stages of their AFC Cup campaign.

A goalless draw ensued after 90 minutes of play against Bashundhara Kings which included a display of sluggishness, moments of brilliance and at times desperate efforts that ultimately were all in vain.

A controversial decision that could have handed the Blues their crucial 3 points had it gone the other way, is the talking point of the game. The supposedly denied goal was a result of Alan Costas’ header off Cleiton Silva’s corner that hit the woodwork and bounced on the goal line.

Head Coach Marco Pezzaiuoli expressed his thoughts on the upcoming match against Maldivian side Maziya and the decision that went against his men.

“We’re highly motivated to finish well in this tournament. Last game was a good game, created a lot of chances and I think we deserved to win. I don’t know how you saw it, was it a goal?”

“I didn’t get anything from the AFC or the referees. Maybe the referee made a mistake? I think in football we try our best and so does the referee. We are sitting here with a different atmosphere because of the result,” said the gaffer.

It has been a busy affair for the Blues who are playing four games in nine days. Pezzaiuoli showed concern about having to go without pace merchant Ashique Kuruniyan who picked up an ankle injury in a previous match against Club Eagles.

“We have a fourth game in nine days, so we have to approach it differently. Ashique has an ankle injury so he might be out for a period of time. We’ll see what we can do with the players who are available.”

Times have been rather testing for Bengaluru FC, facing back to back upsets and finding it hard to be clinical on the pitch. However, they must focus and bounce back to make sure they end their campaign on a winning note.

“I hope tomorrow we make another step forward for our mentality. It’s not easy, but in life it’s not always about winning. We want to progress and move forward regardless of the last result,” added Marco Pezzaiuoli.

Their coach acknowledges the upcoming challenge as they are about to play a side who also have not won a group game as yet.

“One thing we know is that the Maziya team played two games and lost, but we need to respect them. We need to focus on our style,” he concluded.

BFC lost their previous match to ATK MB and unfortunately had to share points with the reigning Kings of the Bangladesh Premier League. This means that they will have to let go of their AFC Cup dreams for this season. The Bengaluru side take on Maziya on Sunday, 24th August at the Maldives National Football Stadium in Male.