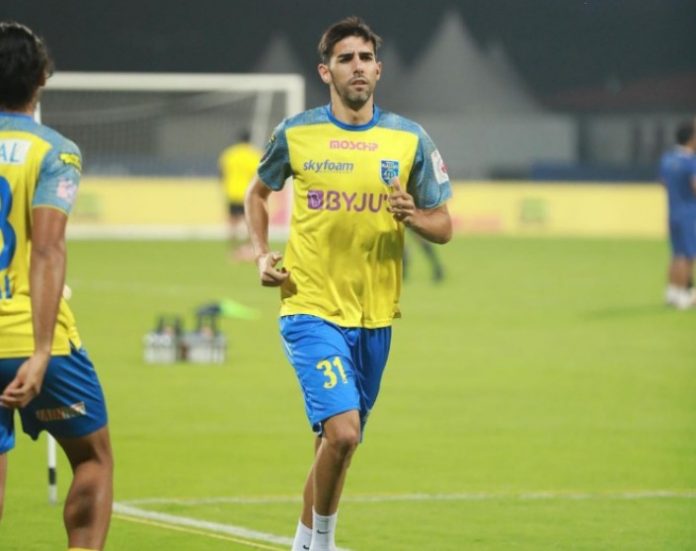 Juande Lopez, the replacement signing of Sergio Cidoncha at Kerala Blasters opined the Indian players must start playing football earlier, and join clubs from a young age that teach them the basics to understand the game and movements.

The 7th edition of Hero Indian Super League saw the club from south, Kerala Blasters enduring a rather unsuccessful campaign yet another time. The Yellow army succumbed to finish at the second last spot in this 2020-21 season, with just three wins, 8 draws and nine losses.

Bother to mention the disquieting foreign recruits, the poor quality of character shown by the Indian contingents. “The Indian Football needs time to improve, it needs a structure to get hold of”, says the Kerala Blaster’s midfielder, Juan Lopez.

Recently IFTWC got an opportunity to interview the star midfielder Juande Lopez of Kerala Blasters’ side, who had been an accordant force to Kibu’s side despite the below par performance of his team in the 2020-21 ISL.

The Spaniard defensive midfielder joined the Kerala Blasters as a replacement signing for the captain Sergio Cidoncha, who had been ruled out for the entire 2020-21 season. The Spaniard had strains of experiences playing in leagues across Europe Australia before coming to India. The Spaniard got hold of his experiences, and forked out the best to keep his side active, but it all went in vain.

1. You have been a part of leagues at Spain, Italy and Australia before coming to India. What are the differences you have seen in style of football here?

For me, a big difference would be that the game is stopped for a long time, the pace of the game is slow. And then I think that there are also many mistakes that are not normally seen in European football.

2. When you joined the team you had views that the team is doing good and there is just a little bit you need to add to the team. However, the recent results against Mumbai and ATK Mohun Bagan tell otherwise. What’s your take on this?

My opinion is that to beat the best you need to put in good 90 minutes performances, and we only did 45′ or 60 ‘good minutes against them. We had our chances to win the 3 points but we couldn’t, we have to learn from these situations.

3. What is your take on your Coach Kibu? How well has he done in managing the team and improving the quality of play?

Coach Kibu is a good person.  He has found himself in a totally different situation from what he was used to in his career and I am sure he would have liked to work more with the team, I think it will also have been an experience for him on what he should do and what not to do in the future. You always have to see the bright side.

4. How are the Indian players in Kerala blasters and other teams performing? Do you think the players have good potential to be a part of leagues abroad?

The league in India is improving, it still needs to grow much more.  I think the boys need to start playing football earlier, and join clubs from a young age that teach them the basics to understand the game and movements, then everything in life gets better with a lot of practice. I guess the players who go to the national team see what level they are at when they face other teams, but hopefully in the future I can see a teammate arrive and play in Europe.

5. What is your opinion on the current position of the team in the league? What do you think has been the reason that the team has dropped more points than it has won?

A club like Kerala need to build a team that has a great nucleus of players play together for 2-3 years and each year sign 1-2 players to improve the squad further and in the end the team will surely get a championship.

6. Please share your views on the time you have spent in India so far.

At the football level, I’m going to leave a little disappointed because I have never felt fully fit. I have a feeling of being at 50%, and in the end a player who has been 4 months without participating in games, needs to train much more than the rest, and the league is in a bubble and it is impossible to go running, do extra work other than hit the gym. At least I tried to help everyone a lot. But on a personal level, I met an exceptional group of people, both players and people who work for the team, and I got to know your culture and way of life a little. And that’s the positive part of this short period.

7. The team performs well in the first half but loses its control in the second half which eventually leads to a loss. What do you think is the reason that players are losing their focus in the second half. What is being done to combat this?

In the end, when things were positive, the team was and played well, but at the same time, any unfavorable situation happened then the team was not strong-minded, this is something to improve in the future, if you win 2-0 and they make it 2-1, we need to stay organized and stay calm and keep taking care of your advantage. Also everything can be resolved by details, but we did not do it well enough and all that was weighing heavily. If we had gotten 2-3 wins in the middle of the league, then the team would have grown and we would surely have had more confidence in everything we did.